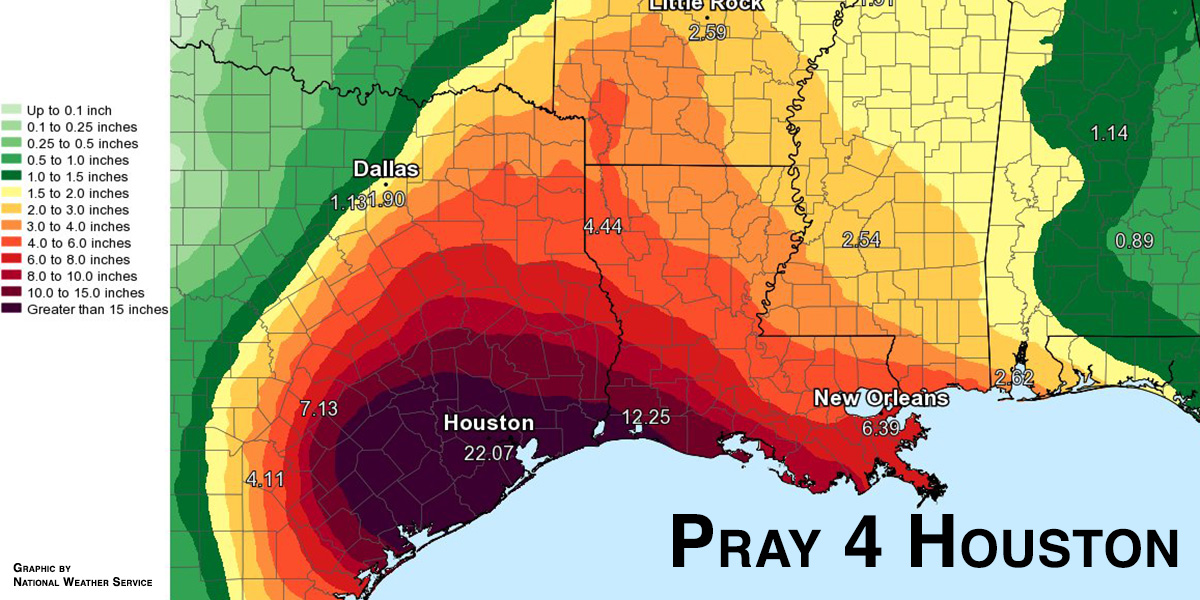 On Sunday morning, those of us with homes and loved ones in Corpus Christi breathed a sigh of relief at the near-miss of Hurricane Harvey.

We mourn for Rockport and the many people who lost homes and businesses as the eye of Hurricane Harvey passed right through.

But those of us from the Coastal Bend know it could have been much worse (think Hurricane Celia). We thank God for his mercy in sparing the coast a much worse catastrophe and are thankful for the preparations by city/state officials to mitigate the worst of it.

As the winds died down and people began checking on homes and clearing, a slower, quieter, but tremendously more dangerous situation was unfolding a few hours north in Houston that took even the National Weather Service by surprise.

Houston is flooding, bad, at levels they did not anticipate.

The NWS said yesterday “This event is unprecedented & all impacts are unknown & beyond anything experienced.”

This event is unprecedented & all impacts are unknown & beyond anything experienced. Follow orders from officials to ensure safety. #Harvey pic.twitter.com/IjpWLey1h8

For the NWS to say that is incredibly ominous. They aren’t “fake news” or a sensational news channels.

Houston is facing a historic flood of proportions yet unknown. Every day a new rainfall record is set, and it keeps on coming.

People are being evacuated by boat every hour, and the waters are only rising higher.

It is unknown how long this flood will continue. We must pray for those in Houston. It has gotten serious enough that civil emergency warnings are being issued that instruct people to get on their roofs!

There are already many active rescues happening, and even a contingent from Louisiana is bringing in boats to help rescue people.

We do not have the staffing or capacity to work during the floods to help with rescues, but are praying and considering possible options on how to help Houston residents hit the hardest.

We are forming a small team to leave soon and help a community in Katy, TX with recovery and rebuilding, and also deliver donated goods to them and possibly nearby shelters. Find out more and stay updated here: Hurricane Harvey Relief