Multiple winter storms have hit our area of the Middle East in recent weeks, creating new challenges for the refugees we work with. The mountains have seen heavy snowfall and freezing temps even at altitudes just below the snow line. The lowlands and metro areas have had large amounts of destructive flash flooding. Even the UN has classified this 2018/2019 winter as one of the most challenging for the refugees since their initial displacement began in 2011. 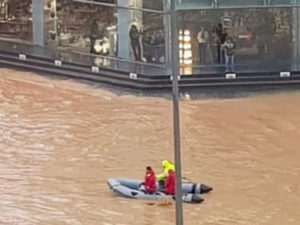 The storms flooded out some refugee settlements in areas below our altitude, as well as parts of the major city. Local rescue teams had to deploy boats to rescue people stuck in their cars in the urban areas. The streets turned to rivers for the day! In the valley region, the UN had to relocate thousands of refugees whose homes had almost waist-high water. In our area the flooding was minimal, though we had snow in many places that refugee families live.

The winter storms have meant unusually prolonged cold weather that has made life more difficult for the refugees. It’s kept them stuck in their small, already crowded living quarters. It’s also shut down the few remaining day-labor job sites for the Syrian refugees. This has left the families with no work and an increased need for material help to survive the winter. We’ve even had some begging us to help them find a way to emigrate to America, which we know is impossible!

We’ve had a huge spike in sicknesses from the refugees being stuck inside from the cold and spreading germs amongst themselves in their rented rooms that often fit 2-3 times as many people as they’re meant to. We’ve also had a rise in requests for help with heating fuel this year compared to last. Because there is often no reliable electricity source strong enough to power a heater for their homes, they rely on their small metal Syrian cook stoves to heat their entire room. 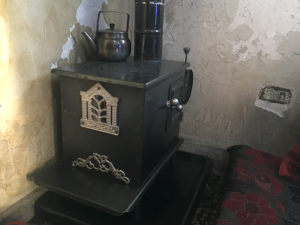 Without fuel for their heaters, the temperature in their home quickly drops as all the buildings out here are made of thick cinderblock concrete construction. This can be particularly difficult for families with small children, and we’ve already treated several cases of pediatric pneumonia that have likely been aggravated by the cold/damp conditions up in the mountains. Mold also thrives in these damp interior conditions, leading to a rise in asthma cases as well.

This winter we estimate we’ve given out at least 7,330 liters of heating fuel, which is about 1,938 gallons. We’ve sought to help some of the refugees being served at another Evangelical church in an even colder area with this heating fuel as well. It’s likely we will give out another 1,000 gallons before winter is over too. Many of you reading this update have been moved by the Lord to help with that need, so we do want to thank you for being a part of that! It is a small but important act of compassion during this season, and continues to keep doors open for the Gospel within the community.

Because of the harsher conditions this winter, we’ve had a spike in respiratory infections during the cold snap. We’ve had to bring several very young babies to the pediatrician to rule out or diagnose and treat pneumonia. We’ve even had some on our team out here contract pneumonia and get even sicker than the refugees! 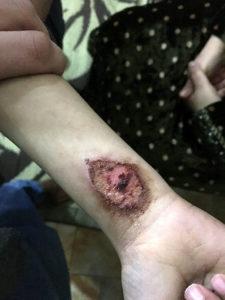 We’ve also had an increase in burns, as in the picture to the left. The heaters used to keep their rented rooms warm are bare metal and unprotected. Add to that the crowded living conditions with many small children in one tiny room, and the likelihood of second degree burns from contacting the hot bare metal is very high.

In addition to the seasonal sicknesses, we have also had an unusual case of an older man possibly having aplastic anemia. He presented to us severely anemic. His hemoglobin was 5.9, even after he said he received a blood transfusion the week before. His sons had spent all their savings trying to keep him alive with periodic blood transfusions, but had finally hit the end of their resources. As we checked him daily, his hemoglobin dropped to 5.7 then 5.4 before we were able to schedule another blood transfusion. We are attempting to find a reliable hospital this week that can do a bone marrow biopsy to confirm the underlying cause. This man came to us only days away from death, and it is amazing he was still alive with such a low hemoglobin. Pray we could find the source of this issue and help to save his life. Pray we could then point him to the One who has eternal life to offer him as well! 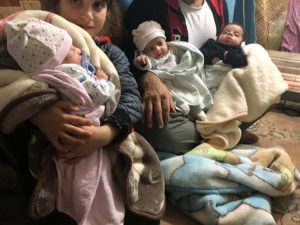 We are also happy to report that all of the surviving quad babies are still home and doing relatively well during this cold winter period! However, the surviving baby boy was found to have an inguinal hernia that is slowly growing. We hope to bring him in for surgery once we can find a capable UN-cooperative hospital to deal with for his case. We don’t want to leave it too long as his intestines are beginning to involve themselves in the hernia. Pray we could quickly find an honest hospital to deal with for this case!

As always, thank you for taking the time to read these refugee relief updates. Thanks to those who commit to pray for these refugees or are moved to support as they are able to!

If you wish to be involved in any way, you can support TGI via our site, sign up for our relief updates e-mail newsletter to better know how to pray, or contact us if you are interested in knowing more about how to be personally involved.