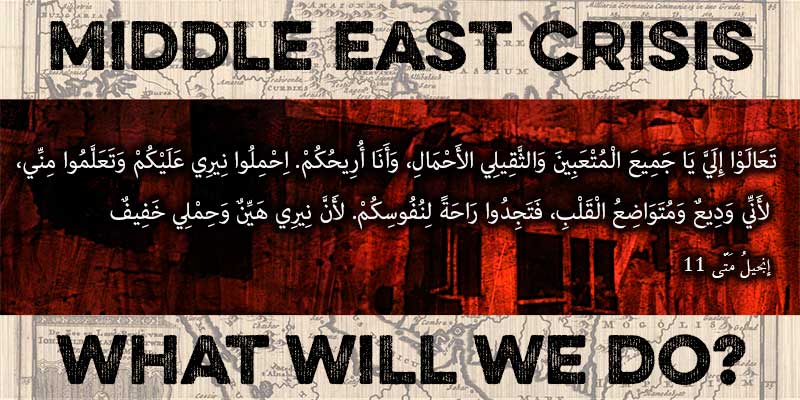 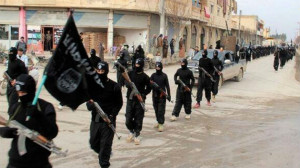 Everyone can see the tragedy slowly but steadily unfolding in the Middle East right now. Rockets are flying indiscriminately from Gaza, followed by Israel’s deadly response. Syria is embroiled in a wearying civil war that has displaced millions of Syrian refugees across the entire Middle East. Iraq is being brutalized by a new breed of Islamic Jihadist that is proving far more fierce than the world first estimated. As I write this there are easily 50-80,000 Yazidi Kurds still hiding in the Sinjar mountains, steadily dying of hunger and exposure.[Update: Thankfully shortly after this was written the U.S. airstrikes and other aid drops were able to help save many on the Sinjar mountains and secure them a passage to relative safety.] Iraqi Christians from Qaraqosh and Mosul are fleeing from the ISIS death chant of convert or die by the sword. At the same time, ISIS is hammering at the gates of Irbil where the majority of Iraqi refugees in the north had earlier sought refuge.

There is little question in my mind that this has become the defining crisis in our generation, one that is not quickly solved nor easily mended even after the guns are laid down and the extremists put to flight.

The question it begs us to consider is what will the Church in the West do about it? Will we go on with the normal fare of life, re-tweeting the newest Driscoll scandal, catching the latest podcasts, tuning out with our favorite distraction from Netflix, burying our head even deeper into the cozy confines of our ever-shrinking evangelical world? Or will the Church rise up and respond to the desperate needs in the Middle East in our generation, knowing the great cost of life and liberty it may well bring. There is a land only a day’s flight away from America where men with assault rifles roam who blithely behead Christians. There are people in this world who think they are doing God a favor by killing us.

The cost to go may well be life. Others have paid it already in these regions. There is a place not far from us where hundreds of thousands huddle in wind swept camps on the edges of the desert, sitting in absolute spiritual darkness, generally helped by either secular groups like UNHCR, MSF and RCC (who by the way do an excellent, astounding, relentless work of compassionate relief aid to these groups and should be commended for these massive efforts) or by Hezbollah, PLA and others seeking to gain them as allies for their own political ends. I know of some, but not many, Christian workers helping in the midst, vastly outnumbered and out-resourced by the staggering need in front of them. Samaritan’s Purse and indigenous churches in Irbil as well are flooded with thousands seeking refuge, well surpassing any local capacity to deal with this rapid influx. 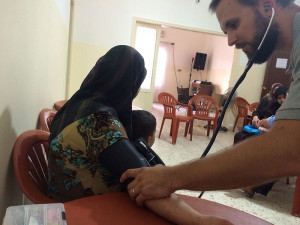 This past month, during the Gaza crisis and shortly before Iraq erupted into this second phase of terror, I had the opportunity to briefly visit Lebanon and other locations in the Middle East. In Lebanon we visited a Christian group in the south seeking to help and reach out to many Syrian refugees, and were able to offer some small help with basic medical check ups and care, but it was a tiny drop in a 500-gallon bucket.

The trip was enough to see both the tremendous need, and tremendous potential, to do good in this region in the name of Jesus Christ. The number of Syrian refugees in Lebanon alone is over 1.1 million registered, with estimates that soon they will be one third of the entire nation’s population. That would be equivalent to well over 100 million refugees flooding the United States in the span of a few years. With people getting outraged over a few thousand children fleeing violence in Honduras coming over our borders, the average American cannot possibly fathom the scale of the refugee crisis in the Middle East and its generational impact on entire nations. The entire Middle East has over 2.9 million Syrian refugees registered with UNHCR with an estimated 9 million others internally displaced, and now add to that 1 million Iraqis displaced by fighting and you begin to see the catastrophic upheavals that are forcing giant swathes of people groups into a marginal existence.

And that brings me back to the original question. What will we do? Generations before us the Church responded to the millions killed and displaced in Cambodia by deploying teams and ministries to Thailand to administer and serve in numerous refugee camps. For many westerners, this was their life’s work, and took years, even decades, of their time, with some undoubtedly dying of disease and other dangers in those jungles. But if you read the histories, and speak to those still alive today who fled to these camps (Such as Setan Lee), God sent revival, saved tens of thousands of Cambodians coming out of the darkness of brutal atheistic communist rule, and began to establish the current church in Cambodia that lives today. The Church rising up to do what Christ told them to do – to love God with all their heart, follow Christ at whatever cost, preach the Gospel to all creation, and help their neighbor in need – saw God work by His Spirit through that compassionate response and change an entire nation. 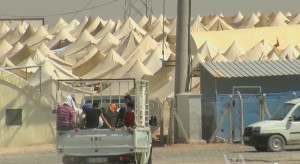 Could God not do this in our generation amongst the millions of homeless, fearful, displaced and despairing Muslims running for their life in the Middle East right now? At the epicenter in Lebanon where the majority of Syrian refugees are coming, and likely soon many from Iraq if they can get there, the estimated number of Evangelicals is only 0.5% of the total population according to Operation World, leaving a significant dearth of Gospel-centered laborers to go among the millions of displaced peoples. Should the Church in the West not mount a compassionate, urgent, sustainable response to this crisis of historical proportions? Or will we sit this one out because they’re hostile Muslims, there’s a war going on over there, it’s dangerous, it’s far away, it’s inconvenient, it’s someone else’s problem, or any other reason we can latch on to? Most posts I have read on this situation in recent weeks rightly exhort Christians to pray for those over there, to write to political leaders to intervene in the region, and to send money to support any already over there. But sadly that is often as far as American Christianity seems to go, choosing to follow a ‘professionalization’ mentality and write a check to have someone else do the job, instead of mobilizing their churches to do what they can themselves do. Not all can or should go, but it is the Church that sends out those who can and should go, it is the Church that prays for them, supports them, and is as actively engaged and interested in the work as those far away on the front lines. Those in generations before us left us such an example to follow. 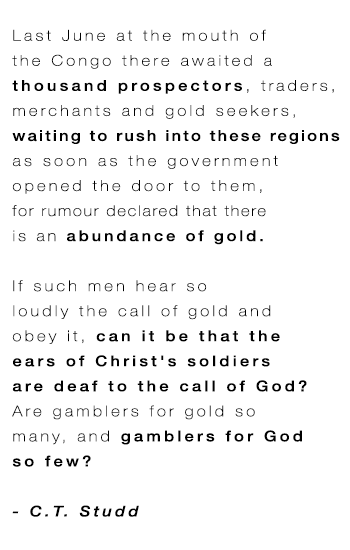 Shall our generation shrink back? Jihadist rebels may kill some who go. Don’t let that fear concern you; God is in control, Jesus said “not one sparrow will fall to the ground without your Father…” It’s more likely you will just suffer the aches, pains and inconveniences of difficult work in a difficult region, wondering if you are wasting your life and sacrificing any future career prospects back in the States. Jesus told us that our plans may not be His plans, but His plans are where our life is to be found. “For whoever wishes to save his life will lose it; but whoever loses his life for My sake will find it.” If you are a follower of Christ, you already lost your claim on your life. It is Christ’s. If He is calling you and moving you to go, by all means go. Beware that you are not praying for that which you are not yourself willing to do. If we hope someone else will step in to keep us from having to do something, God help us.

I am thankful for those few that are already out there, but I know their cry to the Churches in the West is urgently that of send more laborers. One brother in Lebanon has been pleading for years that Biblically-minded church planters from the West come to his city and help him plant a church. Thus far the answer has not come. The laborers out there are few. Jesus told us to pray for laborers. “Seeing the people, He felt compassion for them, because they were distressed and dispirited like sheep without a shepherd. Then He said to his disciples, ‘The harvest is plentiful, but the workers are few. Therefore beseech the Lord of the harvest to send out workers into His harvest.” (Matthew 9:36-38) And then in the very next chapter and verse the same ones that He told to pray for laborers He also sent out as the laborers themselves! Pray, and be willing to go. If the tragic plight of millions of displaced Muslims, Christians and minorities in the region does not move us to do something, God help us.

We are praying at TGI and Sovereign Grace Community Church, the fellowship that oversees this work, as to what the next steps might be in response to this crisis. However, this is far bigger than any one church and any one organization; the need is for hundreds of churches, hundreds of ministries, thousands of true believers, to do something to cross over into this dark, dangerous, hostile and wild land and proclaim the riches of a risen Christ to a fallen and despairing people. It may cost everything. It will at least cost us something. But Jesus tells us to go.