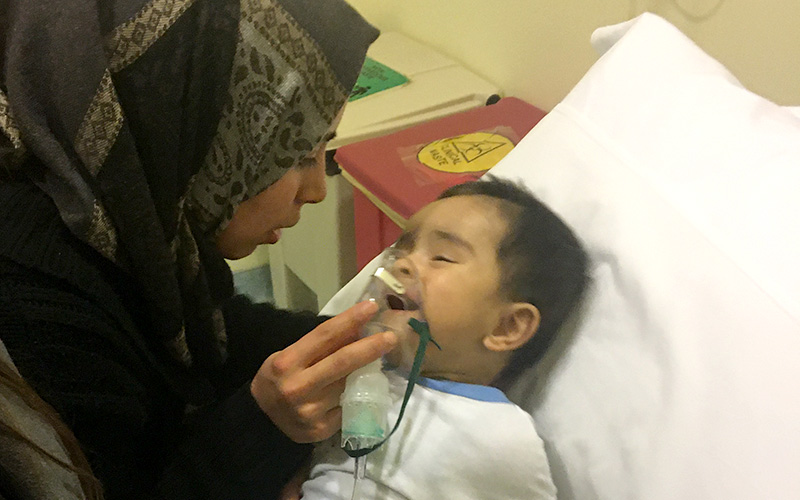 That’s a question you often have to ask yourself when serving in impoverished third-world countries. How much are we willing to spend to save one life?

Last night, the baby in the picture was worth $2,500 and an all-night commitment to find a hospital able and willing to take him. He is, of course, worth far more than that. But last night his life was at the mercy of a system wherein he would either live or die based on what that system determined his life was worth. Someone had to pay the cost to save him.

His mom knocked on the window of our house late last night to appeal for help. She’s a young Syrian refugee mother that lives nearby us and knows our ministry helps with medical needs.

Her little boy – a 7 month old – was in terrible shape on initial presentation. As she entered our door with him bundled in blankets to shield him from the cold on her walk over to our house, we could hear the baby wheezing and gasping for breath.

His respirations were over 60+ a minute. His heart was racing in the 180s and higher. His lungs sounded like a swimming pool when I checked him with a stethoscope. His oxygen saturation on our portable monitor was around 76% at its best. For you non-medical people reading this, that’s extremely bad. If your O2 saturation is under 90% you’ll typically be admitted to most hospitals. Once you hit the 70-80% range it’s now a medical emergency. We realized this baby was on the edge of potentially crashing from respiratory distress to respiratory arrest if he didn’t get definitive care that night.

After giving him a nebulizer treatment, we rushed him down to the first nearest hospital with a good quality peds ward. The night shift resident did what she could to stabilize him with another neb treatment (which we mostly had to administer ourselves in the ER bay) and some oxygen. It was obvious to both her and us that he needed a pediatric ICU. She admitted that they had no more beds in their PICU and said they could do nothing more for us.

She told us we had to go try and find another hospital. They didn’t know (as they have no centralized reporting system on bed capacity) which hospitals had room for him. They weren’t able to find that information out (apparently not even over the phone). We just had to go try our luck at another facility.

After writing a discharge note from the ER around 1am, back out into the cold night we went. We got in the car and prayed that the Lord might spare this little baby’s life and provide a PICU for him. Baby was worsening. His wheezes were tightening. We went to the next nearest reputable hospital that was large enough to hopefully have bed space.

Same story at that ER. They were full. The night shift resident there agreed the boy needed immediate admission. She went so far as to say if we couldn’t find a hospital within the next hour he would probably crash on us. She gave us a short list of potential hospitals to try nearby and sent us out.

We arrived at the third hospital ER around 2am. Initially the same story. They were full, couldn’t admit him. But then the resident put the boy on the monitors and saw how bad he was. He realized the baby was about to crash right in front of them and possibly die. Thankfully he did the right thing and activated the ER team to stabilize him, rather than put us back out into the night with little hope of making it in time to a fourth hospital.

They had no choice but to take the boy after that, as their protocols classified him as critical and non-transferable. They concluded he likely had severe viral bronchitis possibly aggravated by asthma and needed immediate interventions.

But, as is typical out here, before further treatment came the question of payment. Is the refugee woman going to pay the $2,000 deposit to admit him? No, of course not. How could she? That is almost half a year’s wage for most refugees. Are we also willing to pay another $500 for the high-flow oxygen machine so they don’t have to intubate and ventilate him? Of course we would, anything’s better than getting the boy stuck on a vent if we can avoid it!

But of course, that is why the Lord would have us serving out here and not back in America. Someone has to pay the cost in time to find a place that can help. Someone has to provide the money in-person to the facility. Someone has to come alongside these impoverished refugees who have no one to turn to, and try to help save a life.

Finally, around 5am, the boy was stabilized and admitted to a PICU under observation for the night. Later this morning they transferred him to a facility that finally had a bed for him. He isn’t out of the woods yet, but he at least has a fighting chance now with in-hospital care. Pray for him.

What’s one life worth? Everything we can give to save it. What’s one person, created in God’s image, made for His glory, worth to us? We won’t be able to answer that question with our words, but only with our deeds.

I do thank some of you reading this who recently gave financially to TGI, as it enabled us to have just enough money on hand to help this boy last night. You may not have been there with us, but without you we couldn’t have paid the cost needed to save his life.

Some of you reading this also pray regularly, and we thank you for that as well. You may not have been there with us, but the Lord’s help in the hour of need came in answer to your prayers. Pray that this woman and her family would see the love of Christ in all of this towards them, and that it would open them further to receiving the truth.

Beginning To Pick Up The Pieces In Beirut

Sleeping On a Mattress By The Door With a Shotgun